It’s spooky season and I’m back for some baking!

One thing I really wanted to do was make something that’s simple, but effective for this halloween season. These cupcakes would be perfect for any halloween party and as always, are gluten free.

I thought I could turn some mini doughnuts into eyeballs, and top them on top of a fluffy vanilla cupcake, filled with a delicious jammy bloody centre.

Rather than make a faff of the mini doughnuts, I decided to use the Isabels Baked Doughnut Mix. These can be baked or used in any doughnut maker. What I like about this mix, is that you can alter and use your own sweetener or egg replacer if you have other food intolerances. Not to mention they make fluffy tasty doughnuts.

I wish I could tell you where I got the mini doughnut tray from, but I have had mine for years. But I’m sure you can pick them up cheap somewhere online. By the way, the mix makes slightly more doughnuts than needed, so you can just make more eyeballs just as a treat!

To make my eyeballs really pop, I used these Cake Decor Edible Cake Pens to draw on some veins and made them look bloodshot. You can pick these up in the supermarket or online.

And for a proper halloween feel, I removed the centre of the cupcake and made a well with the buttercream so I could put a fair bit of jam inside, to make it seem bloody, and I think it works really well.

So let’s get started! 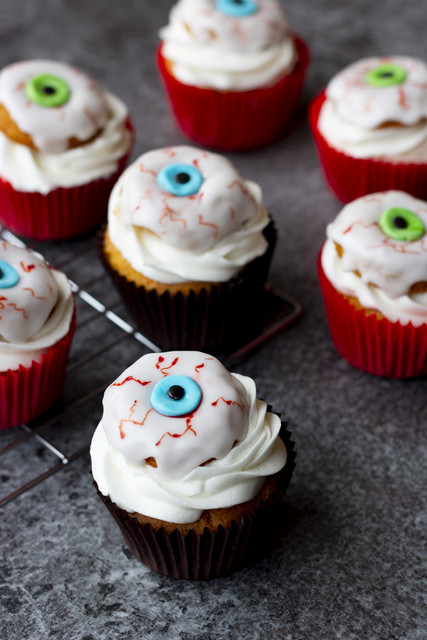 For the Doughnut Eyeballs

To make the eyeball doughnuts:

To make the cupcakes:

To make the buttercream icing:

To decorate your cupcakes:

So there you have it, if you try these, please let me know in the comments! I’m sure I’ll be back to make more spooky treats soon.

In the meantime, don’t forget to subscribe to my blog and catch me on my social media channels!

Let’s normalise doing a whole photo shoot for your sandwich! 😂😂
So we have recently signed up to the @juvelaglutenfree bread subscription box. I’m fed up with going to the supermarket and the only gluten free bread left on the shelf being the ones I really don’t like.
Merry Christmas everyone! Hope everyone has had a lovely and safe gluten free Christmas!xx 😘
Has anybody had a crack at making Christmas cakes this year?
When a 100% gluten free place opens in your town 😍😍… have to give it a go!
🎄🎄First gluten free Christmas with the whole family? 🎄🎄